Burna Boy Might Not Be Relevant Without Fela Vibes (Do You Agree?) 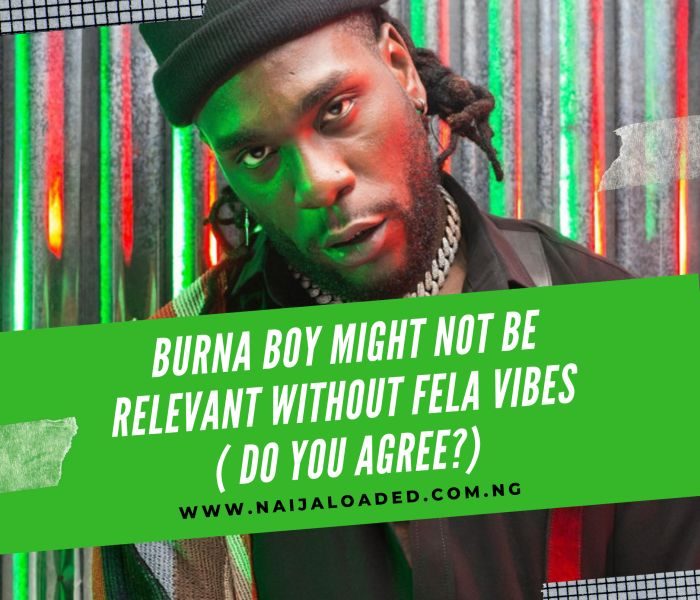 Fela Kuti was known worldwide as the king of Afrobeat. No one ever doubted or questioned the talent and creativity he introduced to the entertainment industry as a whole.

He produced about 50 albums of politically conscious music that enraged the Nigerian government and defended universal struggles of the working class, earning himself comparisons to Bob Marley.

The musical Legend “Fela” premiered off-Broadway in New York in 2008 and moved to Broadway the following year. Since its debut, more than a million people have seen the production across the United States and England, and it has racked up three Tony Awards.

Recent single “Dangote” is a typically Fela vibe and a refix from one of Fela’s old singles. Its title hints at Africa’s richest man while the lyrics mull the need for ordinary people to hustle.

No one is actually is against him using Fela’s vibe but its getting too much. He has actually adopted the system since he came into existence. He wouldn’t get much attention if top artistes like ‘Wizkid‘ did not shift everyone’s attention to it back then.

Wizkid gave us a feel of Fela back then when he sang “Jaiye Jaiye” that was a real and pure Fela vibe and he sang just few songs in such a lane.

‘Falz‘ also did such with his “Moral Instruction” album but his was mixed with his own unique style and creativity.

This Might have prompted Burna Boy to sing “Soke” To reintroduce him again. This is even reflected in his style of dressing, well I thought you noticed too in his lifestyle.

There is absolutely no big deal if we celebrate those who pave way for us tho but do you think Burna Boy is only taking advantage of the fact that we do not focus closely on knowing if those who we celebrate are actually worth celebrating or rather, we should switch attention to those who have something new to offer and say

So Guys, We have some questions for you here 👇👇👇

Do You Think Burna Boy Will Be As Relevant As He Is If Baba Fela Never Existed?

Do You Think He Should Try To Prove Us Wrong By Offering Us Something Different?

Let us know what you feel about this

Photos Of The Business Empire And Mansion Kobe Bryant Left Behind

Daddy Showkey Finally Shows Off Full Length Of His Hair, You Won’t Believe How Long…